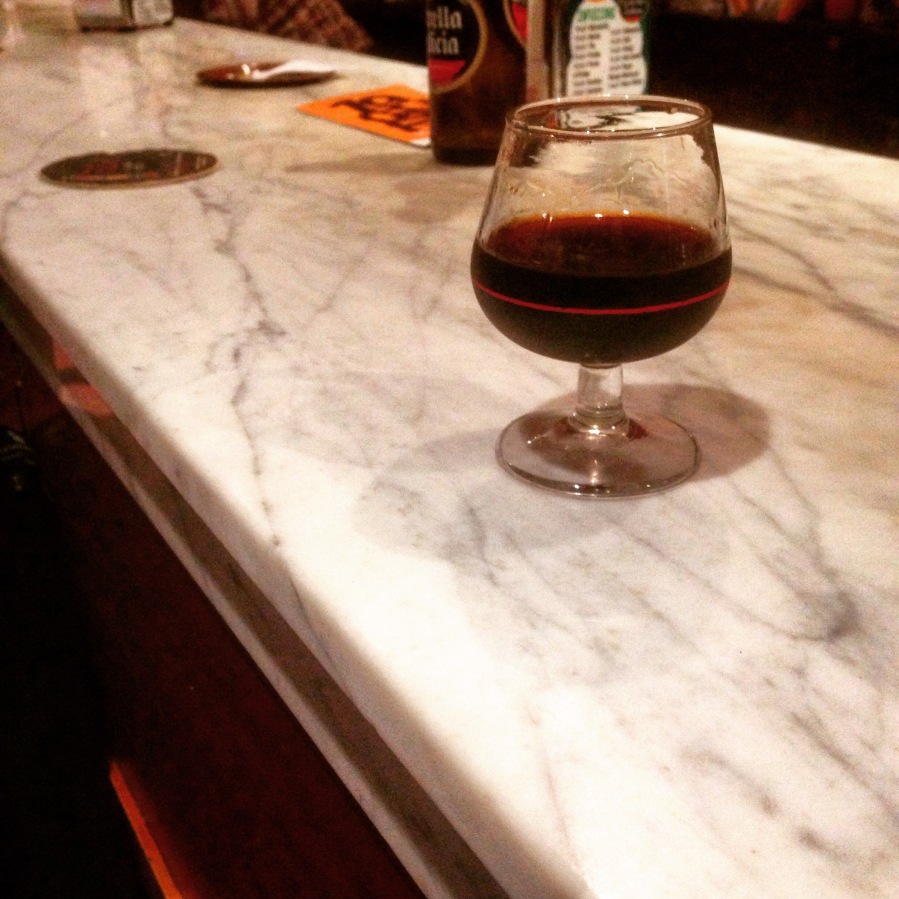 Galicia is renowned for its cuisine. Any Spaniard worth their salt will admit that the best place to eat in Spain is Galicia. It is not just the quality of the food but the diversity. With all the delicious dishes on offer, one needs to have something to with which to wash it down. Here the region does not fail. From a flaming spirit to ward away evil spirits to a world-class wines, Galician libations are top-notch and diverse. These are my top five favorite Galician drinks.

Licor café. The best licor café comes from Ourense. The best licor café comes in unmarked, unregulated bottles, which means that the licor is homemade but also illegal. If ask for licor café at a bar and the barkeep pulls out a bottle with no labels, keep it a secret so the Spanish regulation officials don’t pay a visit and serve the bar a fine. Some of the best licor café I´ve had came in a recycled water bottle from a bar that will not be named. Licor café is made from orujo (a pomace brandy), sugar, and coffee and it is oh so sweet, which also makes it dangerous.

Estrella Galicia. “The perfection obtained in the production of this beer is the result of a knowledge passed down over the years and constantly improved by four generations of the Rivera family.” Brewers since 1906, the Rivera family still owns and runs this Galician cultural landmark. They started in A Coruña and have since dominated both the Galician and Spanish beer market. Hands down the best beer in Spain. The 1906 reserve special is great as well. 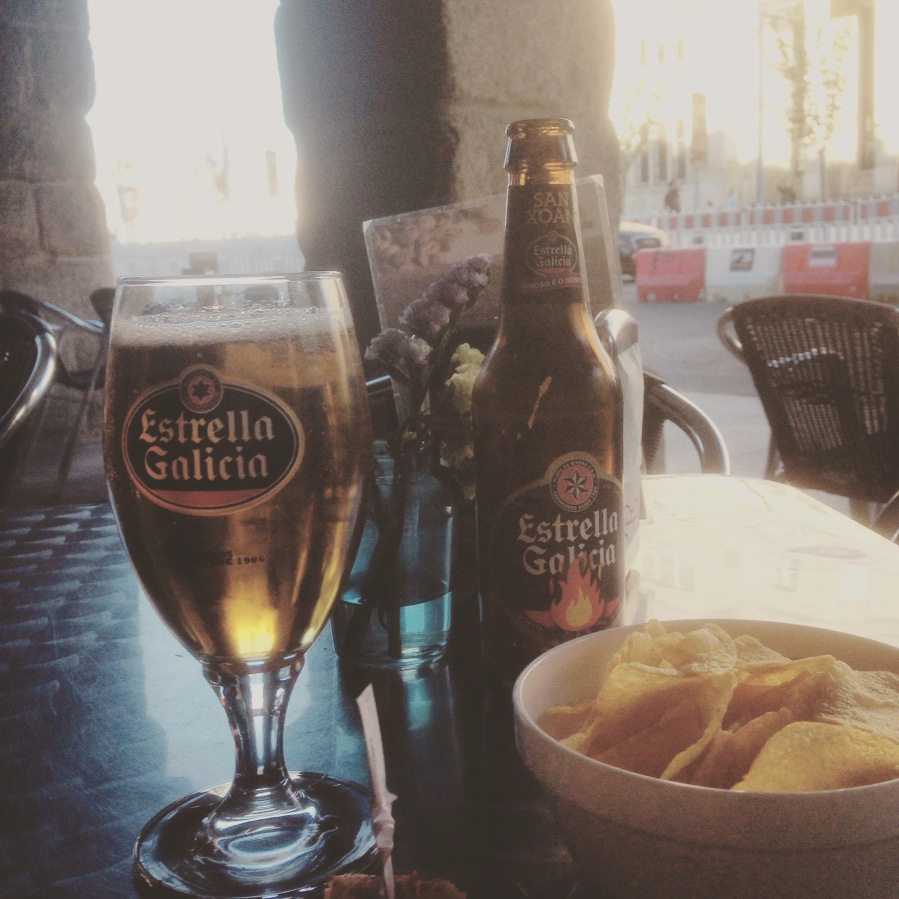 Ribeiro. The Rías Baixas D.O. wines are more well known in Spain and internationally, but I prefer the less sweet whites from the Ribeiro D.O. Again, geography influences my taste pallete, as living in Ourense I was surrounding by the Ribeiro D.O. and the next drink on this list. The Ribeiro D.O. wine region produces mostly whites with the Treixadura grape that is native to the region. Ribadavia is the center of the wine-growing region, so if you want to explore this vastly underrated wine, head their first and ask locals about good bodegas to visit.

Mencía. I had a hard time choosing which I like better, Ribeiros or Mencías from Ribeira Sacra D.O. I was on a Ribeiro kick this spring and summer so with winter approaching I will likely switch to more Mencía wines. This is another underrated Spanish red, overshadowed by the Rioja and Ribera del Duero reds that saturate the international wine market. I was floored when the Chicago hotel I stayed at this summer had a Ribeira Sacra D.O. Mencía wine on their wine list. These wines are grown in a spectacular setting in the province of Ourense, with the vineyards hugging the insanely steep slopes Miño and Sil rivers. They are so steep that it is impossible to harvest the grapes with machines, thus spawning the term heroic vine-growing as the grapes are hauled by hand up and down the steep canyon sides.

Queimada. If you come to Galicia only once it must include a queimada ceremony. It is one of the most revered Galician traditions amongst the Galician people themselves. The ritual, possibly of Celtic origins, aims to ward off evil spirits that attempt to curse men and women. The ritual involves setting ablaze a bowl of orujo with sugar, coffee beans, citrus peel, and cinnamon added while the incantation, conxuro, is recited, giving the drink special powers to anyone who drinks it. Perhaps the coolest and most endearing thing I´ve done in my time living in Galicia was being given the honor of reading the conxuro by my Galician friends.

[ 12 April 2009 ] I hate mud and this day was full of it. Instead of writing about that, I found my journal I kept on this Camino. I wrote the following three days earlier in San Sebastián: "The little old Basque lady spoke to me at length today, most of which I didn't understand. I did hear her say 'muerte' several times. She also asked me about peace, if I wanted it or sought it. She spoke with such passion yet in a quiet voice—certainly it was coming from the heart."
[ 11 April 2009 ] Long distance hiking is like a long exposure that burns a slowly moving image into your memory. Looking back at these photos, I remember the verdant green grass swaying in the coastal wind. I remember stamping my pilgrim's passport at the makeshift roadside pilgrim registry. I remember slipping my way up the muddy path. I do not remember where I slept that night but I do know I slept well.
[ 9 April 2009 ] The Camino del Norte in 2009 was my first long distance hike. Of all the thru-hikes I've done since, the 2009 Camino was my most lightweight: my backpack was 20L. I had no idea what I was doing. I was going to be on the trail for more than thirty days...with a twenty-liter backpack! However, it never gave me any trouble, rather it made me very quick on my feet.
"It was a luminous day with a young, springy kind of light which glistened on the sea." from All Is Silence by Manuel Rivas.
During Easter 2018, I walked the Rota Vicentina, a long distance hiking route through the southern Portuguese provinces of Alentejo and Algarve. The route utilizes old paths used by fishermen that at times cling precariously to seaside cliffs. The route passes through surfing resorts and quiet fishing villages, giving me plenty of examples of the quaint house fronts that I enjoyed photographing during my time living in Europe.
Peña Ubiña was the mountain I most wanted to climb when I lived in Spain. My eyes had never gazed upon it yet I became obsessed with climbing it, perhaps because of its location next to Babia and my romanticized ideal of that region. In May 2019, I finally visited Babia, in the province of León, with the goal of reaching the summit of Peña Ubiña. I reached the col below the peak by mid-morning, but Ubiña was obscured by clouds and the traditional route to the summit was covered in snow and ice. I did not have an ice axe or crampons, so I turned around and headed back down the mountain. One year later I returned, this time climbing from Asturias. However, instead of ascending via the traditional route, I decided to climb a steeper but more direct route to the summit. Halfway up the side of the mountain, I stopped for one minute to curse myself and let vertigo run its course until it was vanquished by adrenaline. After scrambling over scree and bare rock, I pulled myself up onto the summit to greet a climber who had ascended via the same route. My lungs burned and heart pumped as I scanned the horizon, which reached as far west as the Ancares in Galicia and the Picos de Europa to the east. A local sixty-something mountaineer arrived and offered to guide me down the mountain via the traditional route. We chatted about mountains and the pandemic until we went separate ways at the col, he to León, I to Asturias. With Ubiña once again covered in clouds behind me, I strode down to the valley below through fog and a symphony of tinkling cow bells.
The lighthouse at Cabo Vilán, the first electric lighthouse in Spain, keeps watch over one of the most dangerous stretches of the infamous Costa da Morte (Coast of Death).
Iguazú Falls on the Argentina-Brazil border, circa 2006. The name Iguazú comes from the Guaraní or Tupi words meaning "water" and "big". Legend has it that a deity planned to marry a beautiful woman named Naipí, who fled with her mortal lover Tarobá in a canoe. In a rage, the deity sliced the river, creating the waterfalls and condemning the lovers to an eternal fall.
John Muir on Cathedral Peak: "Yonder, to the eastward of our camp grove, stands one of Nature's cathedrals, hewn from the living rock, almost conventional in form, about two thousand feet high, nobly adorned with spires and pinnacles, thrilling under floods of sunshine as if alive like a grove-temple, and well named "Cathedral Peak.""
The Loess Hills of western Iowa were formed from 20,000 to 10,000 years ago of finely ground windblown silt from the glacial deposits. As the Pleistocene glaciers melted, the Missouri Valley became a major channel for tremendous amounts of water. Each winter season, as the quantity of melt water was reduced, large areas of flood-deposited sediments were left exposed to the wind. Silt, clay and fine sand were lifted by the wind, carried to the east and deposited. The forest is named after the geological formation that reaches its fullest development only in western Iowa and in China.
Plitvice Lakes National Park in Croatia, circa 2005. The waters flowing over the limestone and chalk have, over thousands of years, deposited travertine barriers, creating natural dams which in turn have created a series of beautiful lakes, caves and waterfalls. These geological processes continue today. The forests in the park are home to bears, wolves and many rare bird species.
[ Spain ] Ordesa Valley from Faja de Pelay route, September 2018.